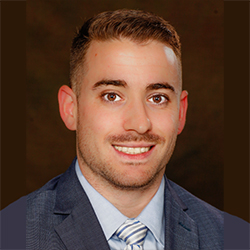 Jesse joined Arnesen Webb, P.A. in September 2015. Jesse was raised in New Brunswick, New Jersey, and graduated from Muhlenberg College with a Bachelors of Arts majoring in Political Science with a minor in Business Administration. While attending Muhlenberg, Jesse was a student-athlete as a member of Muhlenberg’s NCAA Division III football team.

Following his undergraduate studies, Jesse earned his Juris Doctor from Florida Coastal School of Law in May of 2015. Jesse graduated with Pro-Bono honors due to his extensive contributions to the underprivileged in Jacksonville, Florida. Jesse was also a member of Phi-Delta-Phi National Legal Honors Society and the Robert E. Williams Inn of Court. Jesse received a Book Award in Poverty Law and was a Dean Scholar due to his outstanding academic achievement at Florida Coastal.

While at Florida Coastal, Jesse actively pursued justice for the underprivileged through his work at Jacksonville Legal Aid. While at Jacksonville Area Legal Aid, he volunteered at the Sulzbacher Homeless Shelter and aided homeless individuals in obtaining justice through the legal system. In 2014, Jesse was recognized by Jacksonville Area Legal Aid for his contribution to the underprivileged with Pro Bono Honors for non-attorney volunteers contributing more than 100 hours of service. While a student at Florida Coastal, Jesse was also was a student clinician at Florida Coastal’s Disability and Public Benefits Clinic, where he aided families with disabled children obtain Guardian Advocacies through the Probate Division of the Circuit Court of the 4th Judicial Circuit, in Jacksonville, Florida. He also aided families in Disability Claims with the Social Security Administration on denial of benefits and overpayment issues.

Jesse is currently a member of the Florida Bar and licensed to practice in the state of Florida.